The future energy mix will be dominated by renewable energy sources (RES) with zero production costs, such as wind farms and photovoltaics. The abundance of cheap electricity will allow for the replacement of fossil fuels, both in heating and transport sectors. Effective integration of these sectors, within one energy system, will also help to solve the problem of weather-dependent RES production.

It goes without saying that the energy industry is entering a disruptive phase. The centralised model, based on a one-way energy flow (from producer to consumer) is replaced by a dispersed pattern with multi-directional energy flows. The existing buyers are gradually ceasing to be passive energy consumers, becoming instead active market participants who take part in system balancing and energy supply (as prosumers).

Change is inevitable as it is driven by strong underlying fundamentals such as:

An era of a dispersed market of energy producers using available renewable energy is dawning. Greater dynamics of energy price fluctuations, as a consequence of the prevalence of uncontrolled sources such as wind power or photovoltaics, will certainly be an overriding feature of this new market model.
These energy sources offer the advantage of operating at zero cost, but, on the other hand, production is dependent on weather conditions. However, sector coupling will help to mitigate this problem and take full advantage of unlimited access to cheap energy.

The Gresham–Copernicus law states that bad money drives out good. One could say that this rule applies to many aspects of life, but, fortunately, not to energy. In this case, the rule is completely reversed. Good energy drives out bad. Since the dawn of man, from the moment he made the first fire, mankind has been making use of new, more efficient and cleaner sources of energy. Today, we are in a new stage of civilizational transformation. Electricity, as better energy, enters all areas of life one after another, replacing the energy contained in fossil fuels. In recent years, it has become clear that this process is gathering pace in the heating and road transport sectors. We are just at the beginning of the journey, but the “electrification of heat and transport” is gaining momentum.

As analyses of Forum Energii show 1, electrification will boost demand for electricity in Poland by about 70 TWh (50TWh in e-transport and 20 TWh in heating) in 2050. When we add to this the increased demand from other sectors of the Polish economy, domestic energy consumption will rise from the current
170 TWh to about 295 TWh.

Figure 1: Structure and size of generation capacities in the polish electric power system (Forum Energii on the basis of Navigant analysis) 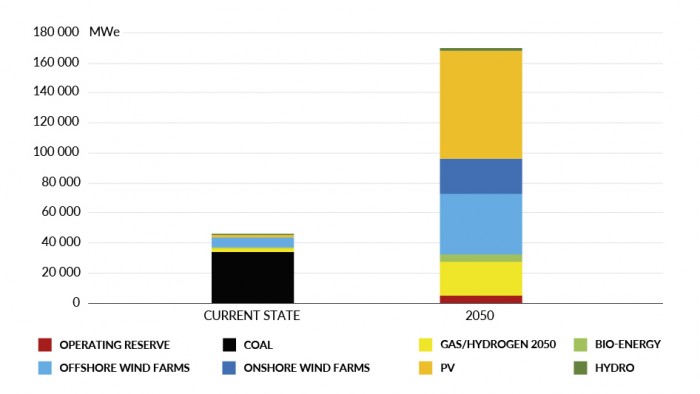 Let's take a look at a possible capacity mix in Poland in 2050, capable of meeting future energy needs, and compare it with the present one (Fig. 1). The annual electricity production of 295 TWh will require a fourfold increase in the capacity of generation units within the electric power system. Those accustomed to a centralized model of energy market may find it impossible. Indeed, it is not possible if only a few huge current players of power generation are involved. Let us remember however, that the paradigm of the sector's functioning is shifting. The era of a dispersed power generation base is coming. Hence, it is not only the four national giants who will build the future energy sector, but also millions of potential investors, driven by different priorities and business models. If we look at Figure 1 this way, we will see that it can work.

Sector coupling as a key to decarbonisation

It is worth defining the eponymous ‘sector coupling’. It is a close connection between the electrified heat and transport sectors and the energy system. Flexible interoperation and response to emerging surpluses in energy supply and temporary energy shortages, enable stabilisation of the entire energy system. In a nutshell, we can say that all energy consumers take part in balancing the electric power system. This is the main advantage of sector coupling. But it has other important assets such as lower operating costs, expenditures on extension of energy infrastructure and reduction of CO2 emissions.

The power balance, such as presented earlier, guarantees Poland's energy security in 2050 and energy supply in line with current needs. The analysis of energy production capacity shows that with such a large installed capacity, when there are periods of excessive sunshine or wind, too much energy will be produced. The amount exceeds what consumers need by about 52 TWh, equivalent to almost 17% of the annual national consumption. The emerging surplus of electricity should be used somehow: it can be stored in another form, e.g. as "green hydrogen" from electrolysis, in the form of heat obtained via heat pumps or as electricity temporarily stored in electric vehicle batteries. Calculations indicate that up to 31 TWh of hydrogen energy can be derived from this surplus electricity, which covers about 42% of the national demand for this fuel by all the gas CHP plants in the electric power (and heating, at the same time) system.

The other side of the coin is that despite such high installed capacity, there are moments when volatile RES are not able to deliver enough energy. Although it is far from being significant as the risk of undersupply is of about 0.8% of annual consumption, it does occur and must not be underestimated. A flexible energy system, well integrated with other sectors, can be a solution. It is at such moments that stored energy is released and, simultaneously, the demand for electricity is reduced by slowing down the charging of electric vehicles, switching off heat pumps or using thermal inertia of buildings. The system operator may, of course, resort to further remedial measures, such as inter-system energy exchange or activating peak-load units.

Figure 2 illustrates how the need for instantaneous charging power for electric vehicles can be adjusted in a situation of flexible demand, responding to stimuli in the form of variable energy prices which reflect the level of supply and demand on the energy market. As can be seen, the level of energy demand can be changed significantly, provided adequate economic incentives are proposed (cheaper or more expensive energy at a specific moment). However, the infrastructure for charging electric vehicles should be sufficiently developed so that consumers react according to the needs of the electricity system operator.

Figure 2: Power demand profiles for electric vehicles in Poland in 2050 (Forum Energii on the basis of Navigant analysis) 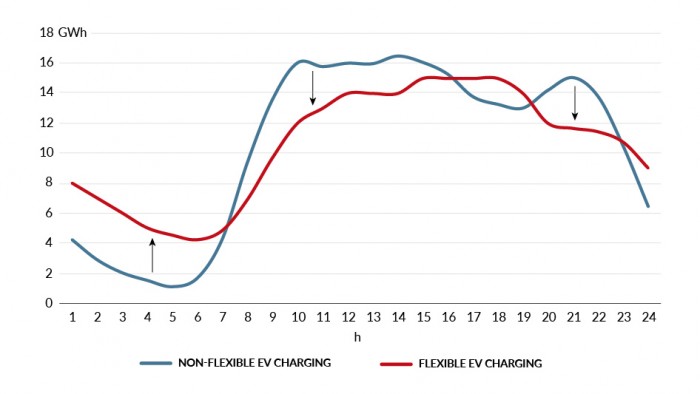 A similar phenomenon of demand shifting to off-peak periods occurs in the heating sector. It is possible to switch off heat pumps without affecting thermal comfort, using the thermal inertia of buildings or the heat accumulated in batteries (if installed).

In conclusion, the higher the flexibility of energy demand from the transport and heating sectors and the ability to temporarily absorb electricity surpluses and refrain momentarily from consuming electricity without consumers losing comfort, the greater the stability of the entire electric power system.

In Poland, heating consumes about 1/3 of the total primary energy stream. 26 million tonnes of coal, 4-5 billion m3 of gas and 9-10 million tons of biomass are used each year. These are huge amounts of fuel and energy. Electrification of the heating industry will only make sense if it is accompanied by thermal insulation of buildings. Analyses 2 show that by 2050 the energy consumption of existing buildings may decrease by about 50% provided a more ambitious strategy of thermal insulation is implemented. The rate of thermal insulation should be tripled to 3% of the total number of buildings per year and, at the same time, an effort has to be made to achieve the energy effect as foreseen by the regulations for new buildings from 2021. Lower heating needs means lower demand for electricity for heat pumps, which eventually will be the major source in individually heated buildings, as well as in district heating (Fig. 3).

Figure 3: Structure of sources and energy consumption in district and non-district heating systems (Forum Energii on the basis of KAPE analysis) 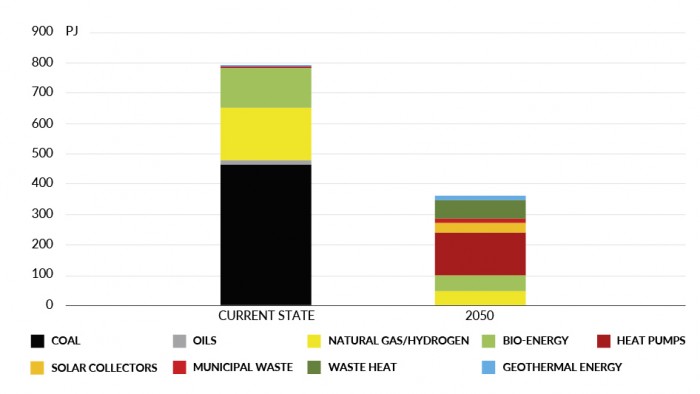 The analyses made by Forum Energii show that the integration of electrified transport and heating with the energy system using RES, may bring numerous benefits to Poland, such as:

As the objective of decarbonisation of the country is closely linked to electrification of the transport and heating sectors, legislative and organisational measures should be taken to accelerate this process.

Planning the development of the grid infrastructure should be driven by the priority of maximizing sector coupling. This will have a synergistic effect in the form of lower operating costs and investment expenditures. Improving the energy efficiency of existing buildings is the cornerstone of electrification of the heating industry. A national strategy for building should be completed urgently and measurable targets should be adopted to reduce the use of non-renewable primary energy for heating and cooling purposes.

Author of the article: Andrzej Rubczyński, director of heating strategy in Forum Energii

Place and date of publication: the article was published in iin the CEEP report on the 6 July 2020.