Capacity market auction results | What next?

On November 15, 2018 PSE S.A. (state owned transmission system operator in Poland) held the first auction as part of the new scheme of remunerating capacity, that is a capacity market. The auction secured 22.7 GW for 2021 for a total amount of over 5 billion PLN (over 1,2 billion EUR). The cost of the capacity scheme appears significantly higher than the 4 billion the Ministry of Energy assumed for the year.

The clearing price for pledging the capacity of 1kW in 2021 falls into the range of 218-240 PLN (about 50 EUR). That means a cost of 40PLN/MWh (about 9 EUR). Little enthusiasm should be expected from consumers as they are already experiencing electricity price increases of 50-70% next year (because of CO2, coal prices increase and liquidity problems). The winners of capacity mechanism are generators who achieved a very good price to improve their financial standing.

By studying announcements of stock companies (Energa, Enea, PGE and Tauron) one may estimate the share of the largest energy generators in the capacity market. More than 50% of units of the capacity market were secured by PGE, which acknowledges the dominant role the company plays. The other Polish energy companies secured 15%, 12% and 4% at the capacity market auction. The share of independent generators (in the category of “others”) is low at only 18%. That is evidence of a significant concentration of the market in terms of contracted capacity raising concerns as to guaranteeing real competition.

Fig. 1. Estimated share of energy companies in the capacity market in 2021. 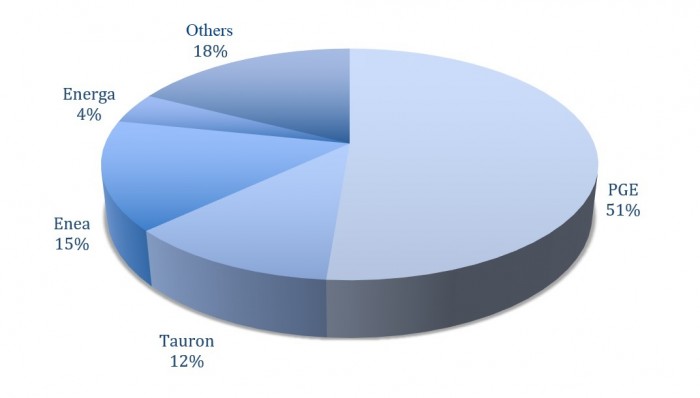 Source: own resources based on company press releases.

According to the EU principles on public aid, and with a certain level of generalization, a capacity market may be introduced for a defined period of time when market mechanisms fail to guarantee the required level of power in the grid.

Fig. 2. Approximate structure of contracts in terms of their duration 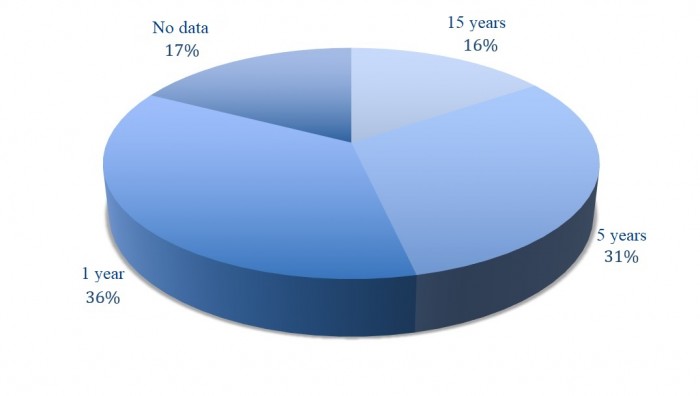 Source: own resources based on company press releases.

No excess capacity or a strategic game?

Bidders entered the auction with a portfolio of 26 GW, 87.4% of which was contracted. That is a high rate when compared to the auction in the UK this year (67% of prequalified capacity was contracted). It seems that PSE contracted almost all capacity which could be pledged available and was offered at the auction (what must be noted is that n-1 auctions will be held where other units will participate, such as thermal power plants).

Fig. 3. Breakdown of the main capacity auction for 2021 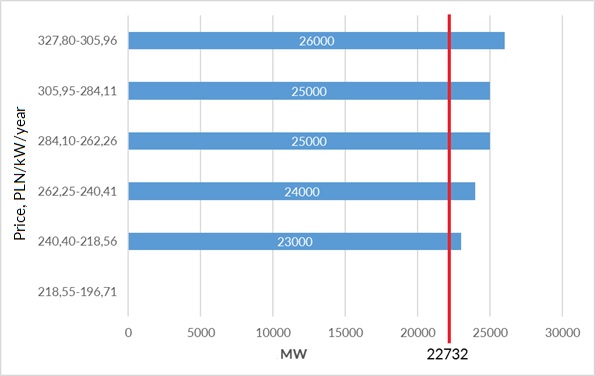 Source: own resources based on PSE data.

Capacity exiting the auction in subsequent rounds may include new build units, refurbishing of existing units or DSRs (so called “price makers”). “Price takers”, that is existing capacity, could only exit the auction at the price of 193PLN. Auction results indicate that the price of 220PLN/kW/year is too low for many conventional new builds or refurbishing units. The conclusions being that many investments in conventional energy are expensive and that building completely new power plants or refurbishing some of the old units is economically unjustified even with major support from the capacity market.

On the same day the first capacity market auction was held in Poland, the General Court of the European Union annulled the Commission’s decision establishing a capacity market in the UK. The reason for the judgment was the Commission’s failure to initiate the formal investigation procedure. In the Court’s opinion, the role of alternative resources, such as DSR, was not properly assessed. The decision followed an action brought to court by Tempus Energy (DSR sector) in 2014. The Court’s ruling on the UK scheme triggered a wave of speculation in Poland as to whether the Polish capacity market may be treated similarly to the British one.

We believe that suspension of the capacity market in the UK does not directly affect Poland. What carries much more significance, however, are the current negotiations in the EU on reducing the capacity market support for power plants emitting more than 550g of CO2 per 1 kW. The question here is not whether the end of such support will be decided but when - two deadlines are on the table now, 2024 or 2030.

What next - initial conclusions