Renewables in the Polish energy mix. Still not enough to meet the targets

The energy transformation has accelerated significantly. Thanks to the enormous cost reduction of solar PV and onshore wind, these technologies are increasingly being chosen by the private sector and households as an investment that allows for significant savings. In recent years, however, the development of renewable energy sources (RES) has depended on state policies and support schemes. They were to enable Poland to achieve the so-called RES target - renewables were to account for 15% of gross final energy consumption in 2020[1]. According to our estimates, the target is still far from being achieved - in 2019 the share of RES amounted to 11.5% only and everything indicates that this year too, the result of 15% is out of reach.

Final data from Eurostat, the EU statistical office, on the achievement of the 2020 target will be available in January 2022. Slightly sooner, at the end of 2021, the estimates will be presented by the Polish statistical office. Such a long time of statistical information processing means that we do not know yet our share of RES for 2019. That is why Forum Energii has made an attempt to estimate this indicator already today. The "RES target calculator" developed by analysts of Forum Energii shows not only the share of renewable energy sources in the mix for the previous year. Also, it allows us to indicate which planned actions may have the greatest impact on the implementation of the RES target[2], although of course it should not be the only aspect for evaluating a given policy.

This indicator combines energy production and energy demand. In achieving an adequate share of RES, it is important not only to increase the production of energy from renewable sources, but also to reduce the total energy demand, which is achieved, among others, by energy efficiency measures.

In order to track progress in achieving the RES target, the energy sector has been divided into three sub-sectors: electricity, transport, and heating. The latter includes industry, district heating and individual heating (Figure 1). 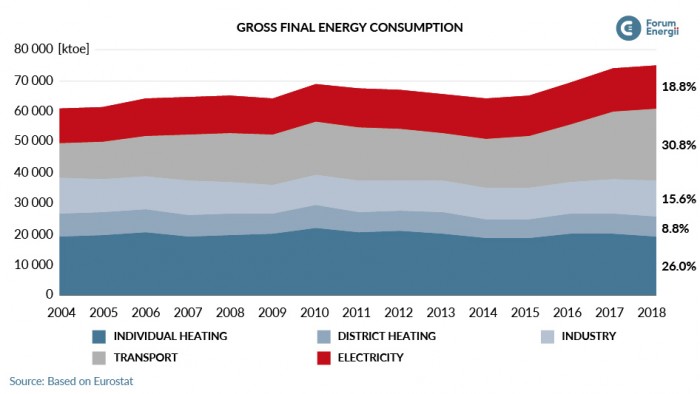 How was it so far?

In 2018, the RES share in Poland amounted to 11.29%, which is approximately the same as in 2013. One of the reasons for such a slow growth of renewable energy sources in statistics is a large increase in energy consumption in Poland. This is particularly evident in the area of transport, where the official consumption of fuels has increased significantly - this is the effect of limiting the functioning of the so-called grey market in the fuel market.

Heating and transport play a dominant role in energy consumption. Therefore, an increased share of RES in these very sub-sectors has the greatest impact on the achievement of the RES target. When analysing the situation of each of them in detail, the following conclusions can be drawn:

Analysing the available data from individual sectors, Forum Energii prognoses indicate that the RES share in 2019 amounted to approx. 11.5%, i.e. 0.2 percentage point more than the year before[3]. Detailed estimates for the three sub-sectors, compared to 2018, are presented below: 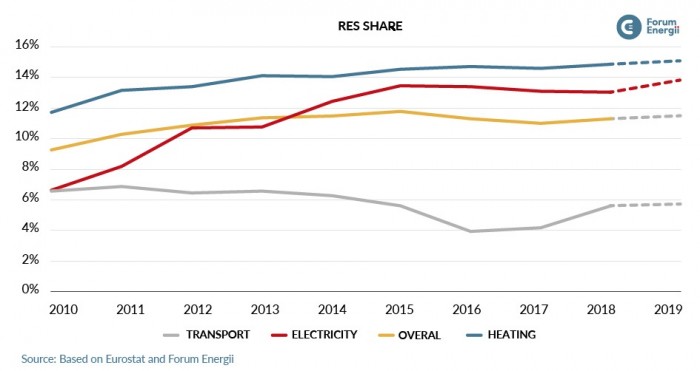 The estimation of the 2020 RES share will be heavily influenced by the consequences of the economic slowdown caused by the coronavirus pandemic. At the same time, however, we observe a real boom in the Polish PV market. At the end of this June, the installed capacity amounted to ca. 2.1 GW, and the growth rate is expected to continue. It is possible to reach even 3 GW in the next six months. In addition, the production of electricity from biomass, wind and biogas is expected to increase.

These trends are certainly favorable for achieving the RES target, but they are still not sufficient to achieve 15% RES in 2020. Assuming a reduced demand for electricity by 4%, a decrease in the consumption of transport fuels by 8.6%, as well as a decrease in the use of fossil fuels in industry by 10%[5], the share of RES in 2020 may reach 12.2%. The missing total volume of energy from RES in all the sub-sectors is about 2,000 ktoe of gross final energy (23.1 TWh or 83.1 PJ). Such a large gap could be filled by e.g:

The development of the renewable energy sources sector should not, however, be considered only in the context of achieving the RES target. It plays a key role in transforming our energy sector. As a zero-emission source it is an effective tool in the fight against climate change and reduction of CO2 emissions.

[1] The European Union is committed to achieving a 20% share of energy from renewable sources in gross final energy consumption in 2020. According to the 2009 RED Directive, all member states have individually set targets to ensure that the EU plan is met. Poland has committed itself to achieve 15%. In 2009, the share of RES in Poland was 8.66%.

[2] The tool is based on the methodology implemented in the SHARES calculation sheet https://ec.europa.eu/eurostat/web/energy/data/shares. This sheet has been developed by Eurostat and is applicable to all Member States of the European Union.

[3] The proposed analytical approach was tested for the results for 2017 and 2018 and our indicators differed by a maximum of 0.1 and 0.2 percentage points from year to year.

[4] In this assumption, we did not take into account the biomass burned in district heating plants, because it is a renewable source.

[5] During the peak of the pandemic (March-April) we used on average 8% less electricity than a year before. This will certainly affect our total energy consumption in 2020, although the scale of the reduction in energy demand throughout the year will probably be less than during the pandemic. In the case of liquid fuel consumption, data for the second quarter is not yet available. Compared to 2019, a decrease in demand can be estimated at 8.6% (International Energy Agency, https://www.iea.org/reports/oil-market-report-june-2020). The annual decline in industrial production is projected at 10% (Polish Economic Institute).