The RES auction marathon is behind us and we finally know the final result. Twelve auctions for various technological baskets, for new and existing installations, were held during three weeks. The contracted 90.3 TWh of new, green electricity for 15 years is worth PLN 20.2 billion. As much as 86% of this volume will be purchased at prices lower than those currently prevailing on the wholesale electricity market. This is another proof that renewable energy sources can compete with conventional units without additional support.

This year's series of RES auctions, held from 25 November to 13 December, was to be the largest so far in Poland. For onshore wind, it proved to be even the largest in Europe. In total, the government expected to order up to 185 TWh for 15 years, 78% of which was to come from new projects. The total budget, including the so-called migration auctions 1, was close to 70 billion PLN. In the end, only 49% of the ordered volume was contracted and 30% of the planned budget was used.

The results are a source of several interesting conclusions about the near future of our RES sector: 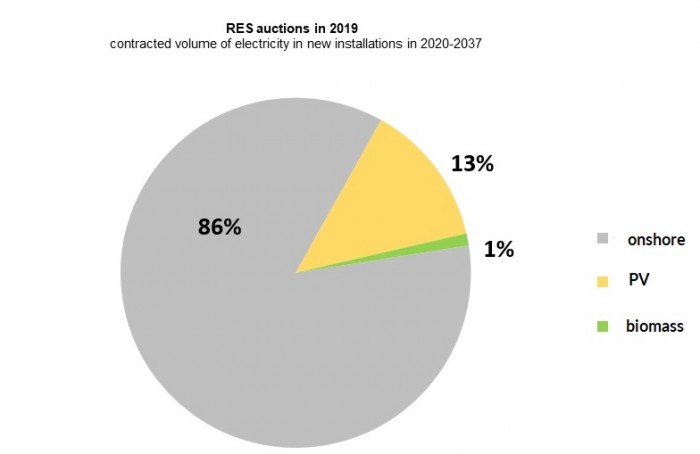 Source: prepared on the basis of Communications of the President of the ERO of 19 and 20 December 2020.

What next with RES auctions in Poland?

Polish energy sector is more and more open to renewable sources and, as this year's auctions confirm, it is less and less connected with the need to subsidise them. In the case of large solar and wind projects, financial support is no longer even necessary. As a result, these two technologies will be the largest source of new power in our system in the coming decades. In addition to the 4.8 GW of winning projects from auctions, we will see further growth in the market for prosumer PV installations in the coming years and the start of construction of the first offshore wind farms. This dynamic development of RES will take place within the discussion on the European Green Deal, which will further emphasize the need for transition of our energy sector.